Lepi Enterprises utilizes dry ice blasting to help clients prepare and clean equipment and machinery. Dry ice blasting is ideal because the cleaning medium does not foul or ruin equipment.

The use of crushed dry ice allows for quick particle removal along with medium evaporation. This provides a very safe alternative to not only clean equipment but also extend the life of equipment.

Dry-ice blasting involves propelling pellets at extremely high speeds. The actual dry-ice pellets are quite soft, and much less dense than other media used in blast-cleaning (i.e. sand or plastic pellets). Upon impact, the pellet sublimates almost immediately, transferring minimal kinetic energy to the surface on impact and producing minimal abrasion. The sublimation process absorbs a large volume of heat from the surface, producing shear stresses due to thermal shock. This is assumed to improve cleaning as the top layer of dirt or contaminant is expected to transfer more heat than the underlying substrate and flake off more easily. The efficiency and effectiveness of this process depends on the thermal conductivity of the substrate and contaminant. The rapid change in state from solid to gas also causes microscopic shock waves, which are also thought to assist in removing the contaminant.

The ice used can be in solid pellet form or shaved from a larger block of ice. The shaved ice block produces a less dense ice medium and is more delicate than the solid pellet system.

Dry-ice blasting technology can trace its roots to conventional abrasive blasting. The differences between an abrasive-blasting machine and a dry-ice blasting machine are in how they handle the blast media. Unlike sand or other media, dry ice is generally used at its sublimation temperature. This means that a pressurized hopper system could potentially build up dangerous amounts of pressure (see dry ice bomb). Other differences include systems for preventing the ice from forming snowball-like jams, and different materials to allow operation at very low temperatures.

Two-hose dry-ice blasting was developed before the single-hose system. This approach is very similar to a suction-feed abrasive blast system. Compressed air is delivered in one hose, and ice pellets are sucked out of a second hose by the venturi effect. Compared to a single-hose system, the two-hose system delivers ice particles less forcefully (approximately 5% for a given air supply). For a given amount of compressed air, two-hose systems can have less vertical distance between the machine and applicator. For most systems available today this limit is well in excess of 25 feet. Two-hose systems are generally cheaper to produce due to a simpler delivery system. These systems are rarely seen today as they are less efficient in most applications. Their principal advantage is in allowing finer particles of ice to be delivered to the applicator as the late combination of warm air with cold ice results in less sublimation in the hose. These systems allow for more delicate surfaces to be cleaned such as in semiconductor.

Single-hose technology was developed by Cold Jet, LLC in 1986, and uses a single hose to deliver air blasts and dry ice. Single-hose dry-ice blasters share many of the advantages of single-hose abrasive-blast systems. To avoid the potential dangers of a pressurized hopper, single-hose dry-ice blasters make use of a quickly cycling airlock. The single-hose system can use a longer hose than its double-hose counterpart without a significant drop in pressure when the ice leaves the hose. The additional power comes at the cost of increased complexity. Single-hose systems are used where more aggressive cleaning is an advantage. This allows heavier build-up to be cleaned and allows moderate buildup to be cleaned faster.

Dry-ice blasting can be used to clean food processing equipment to effectively decontaminate surfaces of Salmonella enteritidis, E. coli, and Listeria monocytogenes such that these microorganisms are not detectable using conventional microbiological methods.

It may also be used to clean some equipment without disassembly and without producing fire or electrical hazards. The EPA recommends dry ice blasting as an alternative to many types of solvent-based cleaning. Dry ice blasting can clean numerous objects with differing, complex geometries at once. Due to the blast media sublimating without residue dry ice blasting finds use in the semiconductor and aerospace industries. 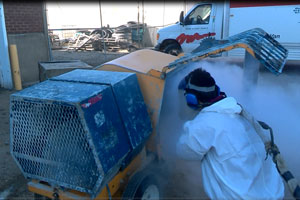